Our 40th Anniversary Event was Spectacular 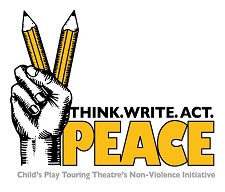 We had live music, theatre, drinks, dinner, a silent auction and an award ceremony to celebrate our 40th Anniversary of our founding and Peace Initiative.

Our host was Honorary Chair - Sondra Healy (Co-Chairman of the Board, Turtle Wax Inc.)


These two videos, a Highlight Reel and a documentary showcase our 40 years of Child Play Touring Theatre.

Videos were made by Gigi Faraci Harris, Documentary Film Maker and Video Producer in the Chicagoland area.

Child's Play Touring Theatre Founded in 1978, Child's Play Touring Theatre was the first theatre company to realize the value of children's own writing and perform exclusively stories and poems written by young authors. Combining the important, imaginative writings of children with the craftsmanship of professional theatre artists and educators, they created a unique stage where children's voices can be heard, examined and treasured.

A nationally recognized, 501(c )3 not-for-profit organization, they inspire young people to read, write and think creatively. The goal at Child's Play is to help children understand the value and significance that writing and reading has on their lives. Their performances and workshops offer a powerful teaching tool that strengthens and enhances the teaching and learning process. Many of the songs were composed from children's original poems by 30 Rocks Writer and former Childs Play Cast Member Jeff Richmond including Child's Plays Theme song "Write a Story" which was co written by Michael Thomas. Another well known Child's Play Writer in Residence was SNL and 30 Rock performer and writer Tina Fey.

Over the years, Child's Play has developed multiple partnerships with other arts education organizations to bring enhanced arts curricula to schools and communities throughout the United States. To date, we have reached over 4.5 million children, educators and adults through workshops residencies, after school programs, and summer camps and have performed the original works of over 20,000 young writers."